Piti Theatre is pleased to announce that we have three interactive theatrical events which work well for libraries and . . . Libraries Rock!

The Story of My Bees

The storytelling version of our touring production “To Bee or Not to Bee” that fits . . . almost anywhere!

Farmer James has lost his bees, there’s only gruel to eat and now the townspeople (the audience) have arrived to protest, chanting “There’s no good food, we’re in a bad mood.” To Bee tells James’ comic, tragic and ultimately hopeful story – complete with puppetry, clowning, dance, live music and lots of audience participation. Piti created the show to raise awareness about the honeybee’s plight and gives children and adults tools for helping bees thrive in their communities.

The “Rock” connection is that Story of My Bees tours with an actor and pianist-singer and is filled with fun “folk rock” style songs. 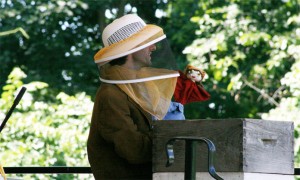 Libraries have the option of scheduling a pre-show acting workshop to integrate children more into the show.

Listen to the music

Story of My Bees webpage

To Bee or Not to Bee webpage

Play in a Day

We arrive with a box full of props and costumes and guide children ages 7 and up through a structured improvisational process where they write new playlets “on their feet.” We can base the improvisations on the “rock” theme . . . or not!

Here’s how one librarian described the process: “Jon Mirin of Piti Theatre provided a delightful experience for children to write and perform their own plays at our public library in Northfield.  With a wonderful open-mindedness toward children’s interests and creativity, combined with a professional’s expertise, Jon coaxed charming stories out of the children, inspiring them to enthusiastically concoct absurdist theater that was fun for them every step of the way, from warm-up to brainstorming to improvisation to rehearsal and, finally, to a charming performance.  We are grateful to have had Jon’s theatrical and educational skills put to good use at our library, for the benefit of children and audience alike, and we look forward to further collaborations with Piti Theatre.” – Matt Atwood, Programming Librarian, Northfield Public Library

Piti Theatre Company released their first album in March 2018 and it contains three of our “rock songs” from an elementary school residency/production called “This is Your Rock” based on a request from teachers for a show about rocks, minerals and geology. We also have several songs about fossils/dinosaurs from a show called “Dexter and the Dinosaurs”. 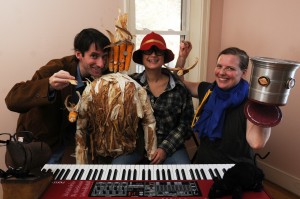 Listen to “Three Kinds of Rock”

Listen to “I’m a Rock Goin’ Through Changes”

Learn more about Dexter and the Dinosaurs

This event includes an optional acting workshop where children will create their own “playlets” (see “Play in a Day” above) inspired by the rock theme that will be integrated into the performance, an actor and keyboardist, actual rock specimens and plenty of audience participation.

“Thank you so much for presenting your show, “Story of My Bees” at the Wareham Free Library this fall. It was a wonderful program on so many levels. First the music and the interactive parts for children kept even the youngest engaged and they definitely learned the message about not being afraid of bees and how they can help . . . Among all of that there was even more content for the grown-ups in the audience presented in a fun and entertaining way!” – Marcia Hickey, Children’s Librarian, Wareham Free Library

“The Greenfield Public Library was pleased to have Piti Theatre bring the magic of improv to the library meeting room, to the delight of an audience of parents and friends. Their Play in a Day program enabled a group of young people to write and perform three entertaining stories through the guided improvisation skills of an experienced and masterful teaching actor.” – Kay Lyons, Children’s Librarian, Greenfield Public Library

“With their expertise in teaching the art of acting, Jonathan and Godeliève have added immensely to the programming I can offer . . . the initial series of workshops has given rise to a dedicated group of teenage thespians who delight in writing their own plays and performing them for family audiences . . . the teens enjoyed  working with Jonathan so much that they didn’t even notice he was skillfully using his expertise to bring out the best in their play and their acting.  They easily incorporated his suggestions into their actions and dialogue because Jonathan never lost sight of their ideas and preferences.” – Candace Cross, Children’s Librarian, Wheeler Memorial Library, Orange MA (retired)